In this summer I participated in Google Summer of Code and implemented border on the character level. So in the next 4.2 version of LibreOffice users will be able to set border around a run of characters. 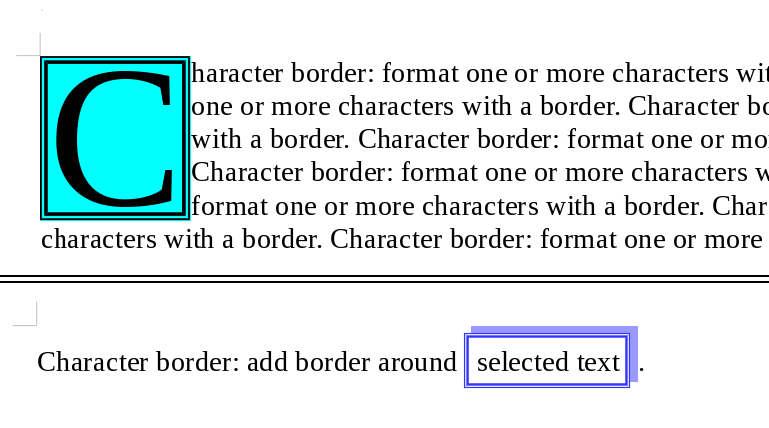 While I was working with character border and I was testing whether it works in all cases I realized that Drop Caps has some bugs which keep me from adding my new feature. So I have to solve them before I able to keep on my original project:

Height of the first line was changing unexpectedly when the drop cap letter's original height was bigger than the height of the following characters. Original means the height which it would have if it wasn't a drop cap. By now this original height is ignored during height calculation of the first line.
Since border rendering increase this height with the border width, line height also increased with this width.

The implementation of character attributes and the specification of ODF file format make it necessary to add automatic border merge functionality. Border merge means that if two text ranges have equal border (same line, padding and shadow) they will be rendered inside the same border. 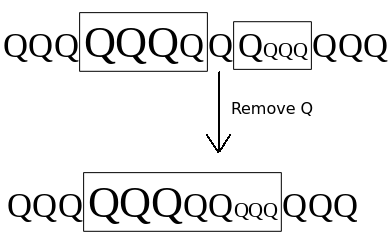 Border merge also means background merge, since this is a general concept to draw border at the edges of the background.

Some new things get into this version of LO.


1. The primary improvement is adding a combobox to the design view and so not needed to use SQL view to limit the number of resulting rows. This new edit is get place on the query design toolbar and in the Query Properties dialog (Edit -> Query Properties).

2. LO uses HSQLDB (version 1.8.0) as an embedded\default database so this is an commonly used driver for Base. However it has a bug which lead to an exception when user intend to run a query like "SELECT * FROM table LIMIT n". The problem is HSQLDB's parser does not handle "LIMIT" as an keyword and so in this case "LIMIT" parsed as a table alias and the following number as an unexpected token. Inside LO this bug is fixed by now.

Of course it also means LIMIT keyword can't use as a table alias anymore in LO as it was used before. These usage is stand only when use "Run SQL command directly" option. (LO has an own parser which notice that LIMIT is a keyword and so can't be a table alias, but with this option this syntax check can be avoided)

3. This is my favorite. In SQL mode, in the SQL edit the LIMIT keyword was highlighted wrong as a single name (green colour) and not as a keyword (blue colour). The origin of this problem may be the same as in case of HSQLDB's bug. The LIMIT keyword got into the code later as other keywords and it was missed to add all of places where a keyword has to appear.


Thanks for FSF.hu Foundation for funding this work!
Posted by Tamás Zolnai at 8:24 AM 2 comments: